Many times I will have a certain musical idea in my head, for example, a phrase that just popped into my mind. Or perhaps it’s part of a solo that I heard on the radio earlier. I want to be able to play it on the guitar but I am having a hard time figuring out the individual notes. I just can’t hear them clearly enough in my mind. What do you do?

How to Play a Song by Ear on the Guitar 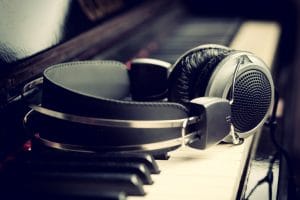 It’s very simple: you vocalise it. If you can sing something, you can play it. Our voices are in much better connection to our `inner jukebox’ that is our mind than our fingers are. This is because we use our voice all the time and have been pretty much since we were born. Thinking of some musical phrase or tune and being able to sing it instantly is something that we take for granted. But it has taken us many hours of practice to be able to do this.

We don’t practice the guitar nearly as much as we have practiced our voice, and so for many people it takes considerable more time to figure out how to play a new sequence of notes on the guitar than it is to vocalise it.

We can use the voice as a tool to aid our playing. Sing the passage out loud. Really make a point to vocalise each individual note at the right pitch. Once you can sing the the thing correctly, sing each note in turn and figure it out on the guitar.

Now, if you can’t vocalise it correctly, you will have a very hard time figuring it out on the guitar. Sometimes you’ll be able to recover part of whatever it is that you have in your head, but most of the time it’ll be lost. The more you force yourself to hear it in your mind, the harder it will become. The trick is to let go and allow your mind to play it for you. In a future post I will describe this process in more detail.

The more you vocalise and play, the more practised you become at it. After some time you’ll sing something and be able to translate it to the guitar very quickly. There are some tricks you can use to get there, but I will leave that for another time. Ultimately, you want to get rid of the singing altogether. But this takes considerable time. Even the best players still vocalise sometimes when improvising. It makes a musical idea much clearer in your head.